This year’s been weird. Weird for you, weird for me, weird for the whole planet. I’d lie if I said I hadn’t hoped we’d be back to some kind of normal, and looking back at my new year’s resolutions makes that really evident to me. One of my goals this year was “release 3 games”. When I was writing this goal, I thought I was being modest. In 2020, I had released 6 games in total, so halving that amount seemed pretty generous. Well, I did not account for how much my life would change this year, and what that’d mean for the way I work on projects (and myself). So this year I’d like to look back at what happened, what it means for my games, and just take stock of what’s going on. This will feel very self-indulgent, I’m sure.

Before we hop in: Are you alright, friend? Do you need a small stretch? Or a sip of water? Go ahead, I’ll wait :)
All set? Great, let’s jump into it!

Ripping the band-aid off right away: the Steam release will not be happening this year. You probably guessed that one already, as there are not too many days left in this year, but I should probably state it explicitly! I’ve been struggling with deciding on when to put out the game, but there is still a lot of stuff I’d like to see make the cut. I still think the version hitting Steam should be generator-complete; I don’t want to change the generator post-launch, save for fixes if possible.

Now that I’m working in a game studio full-time, my work process on Shutter Stroll has definitely shifted. Not only do I have a lot less time to work on the game; work on it mostly focuses on features I want to develop at that moment, not the ones I think are strictly critical for the Steam release. I know that’s not optimal, and the game already being released in some way undoubtedly minimizes the pressure that’d push me to complete the critical features.

But as this year nears its end, I keep thinking about what it really is I want this game to be. And you know what? I think it is good as it is. This simple sentence actually took me a lot of time to realize. I’m realizing that the generator does not need the absolutely huge overhaul I had planned initially. Many things I would like to implement are definitely novel, but do not add to the experience as much as I like to think. After all, Shutter Stroll is a minimal game. No goals, no time limits, just you and whatever you want to do on these islands. And I think I should make sure I do not lose that through implementing (super cool) features, but actually just polish up what is there and provide more content, not change up the one that is already in the game. There’s always another game on the horizon, no need to put all of the things into this one. After all, that’s why I already made one spin-off, and I’m certain there will be more.

So in short: it will be done when it’s done, and that done does not have to be world-changing ✨ it’s nice if it’s nice.

I want to take the time to spotlight a few creations inspired by Shutter Stroll that made me so very happy to see! So here are a few goodies for y’all!

First off: A short, relaxing track by @NylePudding, made while visiting a daily island!

A bit of moon worship, courtesy of @milkybois!

Some photos I took of the moon? Sun? In #ShutterStroll pic.twitter.com/Med8q1Y9d0

This photo series blew my mind, courtesy of @SpiffSnaps (some of the photos are black on purpose, including the first, but keep clicking!) 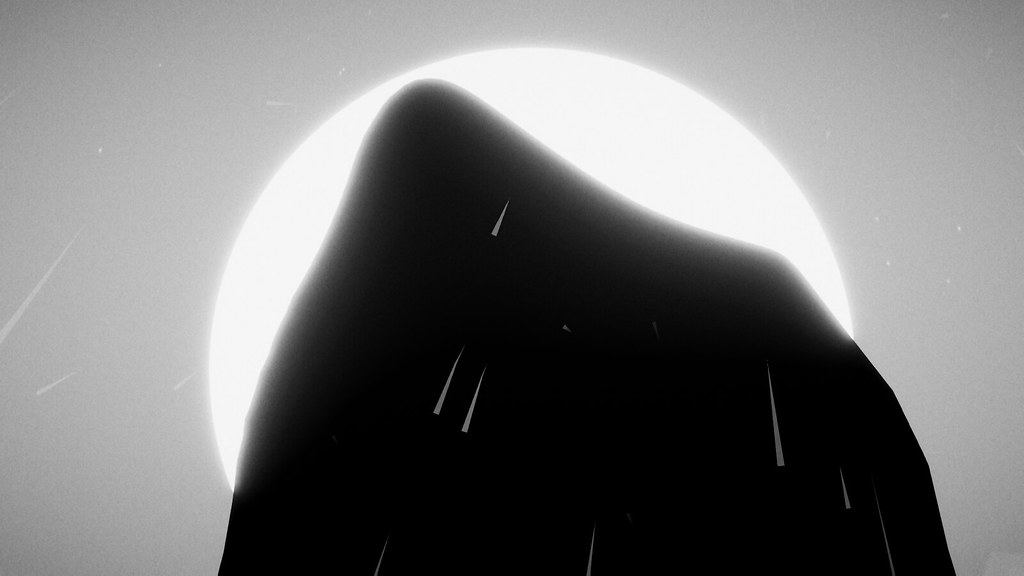 Another enthralling, mysterious track by @adibabidan! I highly recommend loading up the island and walking around to the music!

These photos by @UltimiaSeth blew my mind, especially the green picture is unlike anything I have ever seen before when developing the game!

#shutterstroll
I have a few (three tweets worth lol)
saw a bunch of good sights :) pic.twitter.com/RvBaYztawf

One of the biggest reason for the delay on any Shutter Stroll updates is my new job! I’ve joined Off The Beaten Track as a game developer full-time, which obviously cuts my time for personal game projects down to a small fraction of before. I’ve been able to work to my strengths as a generalist, and jumping between departments and team members is a lot of fun! That also means I’m definitely still in the process of adjusting and balancing work-time and free-time dev, which has been very tricky!

Where the mind wanders…

Being busy doesn’t mean I don’t have ideas, though! I’ve been journaling all of the game concepts my brain has been cooking up all year long, just to make sure I don’t forget any gold. And a few months ago, after playing some very inspiring games (more on that below) I had a game idea that kept me awake all night. So in the span of a few days I started jotting down notes, planning out systems and visuals! And while there is not much to show publically yet, maybe I can show you at least one small thing related to the next game (?) set in the Shutter Stroll universe.

fun and games (but mostly games)

So here’s a heads-up: Most of these games didn’t come out in 2021. Heck, s0me of them are a few years old already, but these games meant a lot to me this year, and I’d like to at least tell you to play them!

I first played A Catfiend’s Impending Relapse at the end of one of our horror game streams, as an encore so to speak. We thought, “Hey, let’s give the game a go, should be fairly short!”. What followed were a good two hours of me trying to clear devilishly clever freestyle platforming with input lag due to playing remote, but still having a great time! It’s a game thick with atmosphere, a Sisyphean task which keeps you guessing: “Can I make that jump? If I can’t, I’ll have to start all over…”. The sheer thrill and stakes of the game kept me awake until deep in the night, and even after finishing it on stream and replaying it the morning after, I am still thinking about it regularly. It’s been a huge inspiration in how I think about games.

I played Celeste back when it came out and loved it. I bought it again on Switch, where I completed it to 100% out of sheer love for the world, the mechanics, and the characters. Days were spent in wonder, playing Farewell and having my mind blown with every new challenge. When Maddy Thorson wrote about how Celeste was a trans story she did not know she was writing, it just further solidified my belief that Celeste in one of the most impactful games I have played in my life. I keep bothering friends to play it, and I’m glad they’re listening, haha. This year, I started missing playing it so much, I finally jumped in and tried something I was interested in for a long time now: speedrunning. I started doing speedrunning attempts on stream, and it is super fun; I love hanging out with you all while I try not to choke on summit. As of writing this, my personal best for Any% is 53:45, which you can watch below!

The MISSING: J.J. Macfield and the Island of Memories

At the moment of writing this, my playthrough of The MISSING has only been a few days ago. But I’ll be honest: As soon as the credits of the game rolled, no, even before, I was certain this game will stay with me for years to come. It is a story I do not wish to spoil too much; I think the way the game slowly pulls back the curtain on the actual events of the game is something you should experience yourself, but I can say it is a magnificent story about the pain of trying to be who you truly are. The story resonated with me so much, and there has not been a day when I have not tried to get friends to play it. Trust me on this one.

When we started to stream Adventure Jam games on the Off The Beaten Track Twitch channel, I had not expected to stumble upon such a gem. The setting of BoT1 tingled my brain in the best way: set on a planet with perpetual daylight, you’re trying to help your partner overcome her trauma of her home planet being destroyed. The multicultural setting is unlike anything I had ever experienced before, and the unique mixture of medially underrepresented cultures and the ramifications of a planet that has no night are felt in every fiber of this story. I was and am still incredibly impressed with the richness of the game, and thinking about this being developed in a game jam has my jaw on the floor. I’m looking forward to the future games of the developers, and anything I’ve heard so far suggests that it will be just as good, if not even better.

I love information games. Games that make you scrounge the world for hints, clues, and have you interrogating everyone around to piece together the happenings of the past. Paradise Killer is a murder mystery set on a weird vaporwave island. The setting is positively insane, dripping with lore, and I was utterly lost when the game started. You arrive the night after a murder happened, and it is your job to find out what happened, and execute justice. What surprised me, was that you are not able to access the actual scene of the crime when your investigation starts! It kept subverting my expectations as I tried to put together a timeline of events, collecting hundreds of crystals in the weirdest places, and blasting some funky disco bangers wherever I went. The game drips with style, the murder case is interesting and obscure, and after I had already said to myself “this game is amazing”, the game surprised me with one of the coolest mechanics I ever saw in a detective game. Again, I won’t spoil it, but you need to play it. The journey is incredible, and the end is nothing short of that.

Are we on the internet?

One of my goals I actually did manage to fulfill this year was to pick up streaming! There were times where I was streaming very regularly, and some times where I did not for a few weeks, but I never truly stopped! It’s been so much fun, honestly. I love every minute I get to hang out with you all who decide to come by and chat a bit, or laugh at me losing it at the word “Boner”. A special thank you to my friend Sol who decided to share his brain cell with me as we tried not to cry playing horror games (will be back soon!) and Fiore for playing some really rad and queer games with me!

Even though I missed the mark on the goals I set myself for this year, a bunch of cool stuff happened! I want to list a few cool things that happened, that I am incredibly excited about, so future Jannik can look at it and remember that the goals we set are not the goals we might accomplish:

So, that’s it! I’m ready to be surprised by what the next year is holding for us (please not another pandemic though), and I hope to see you on the other side with me! Thank you for reading this, I wish you all the best, and I’ll see you soon 💖